Never before have I come across a show that I felt so compelled to watch over and over again, let alone write about. Maybe it was my ability to relate to him as an Asian American born to immigrant parents, or maybe it was the fact that we’ve both lived in Davis, CA (#GoAgs), but something about Hasan Minhaj’s Homecoming King really stuck with me.

This isn’t a typical Netflix comedy special, nor is it typical stand-up comedy in general. This isn’t a comedian telling short vignettes punctuated by punchlines in an attempt to get as many laughs as possible. Homecoming King began as an off-Broadway one-man show based on Hasan’s life story: his family’s immigration to America, his navigation of high school as one of the only brown kids, his particularly awful prom night, and the audition that led to his rise to fame as a correspondent on The Daily Show. While there are comedic elements throughout, they are juxtaposed by his discussion of intergenerational conflict and his experience grappling with racism and bigotry—both subtle microagressions and overt discrimination—as a Muslim Indian American.

Even then, he addresses these issues with such honest and insightful story-telling. By the end of the show, you find yourself rooting for Hasan because there’s something about his story that resonates with everyone regardless of race, gender, class, or creed.

For me, it was his relationship with his father. An immigrant father with whom interactions with are almost exclusively limited to him saying, “Get into Stanford” (yeah, that part hit a little too close to home). An immigrant father who dismisses his children’s struggles in America because the hardships he endured back home were vastly worse in comparison. An immigrant father who can’t relate to the fact that, as American-born citizens, first generation kids have “the audacity of equality.”

When Hasan recounted his father’s near-death experience and how it felt as if he was “saying goodbye to a person I barely even know,” it reminded me of my dad’s own health problems and made me realize that were is so much about him I may never get the chance to know if things turn fatal. Regardless of the morbidity, it’s a common issue for children of immigrants to feel as if, no matter how hard you try to connect with your parents, there will always be a sense of not completely knowing who they are. Granted, part of that is because, as Hasan says, “Immigrants love to keep secrets.”

Though it’s only one of the underlying themes of the show, Hasan highlighted the importance of bridging the generational gap while we still can. No matter how daunting or frustrating it can be, opening up to our parents and trying to see the world from their perspective can help us better understand who they really are. Doing so can lead us to find a balance between the two worldviews that may not be as different as we once thought.

Even if you don’t necessarily relate to intergenerational conflict, there are so many other valuable lessons throughout the show. To not fold to “Log Kya Kahenge” (what will people think). To not look for a cosign or rely on people to tell you “you’re good enough.” To not let anything get in the way of you chasing your dreams, because “this is New Brown America, the dream is for you to take.” 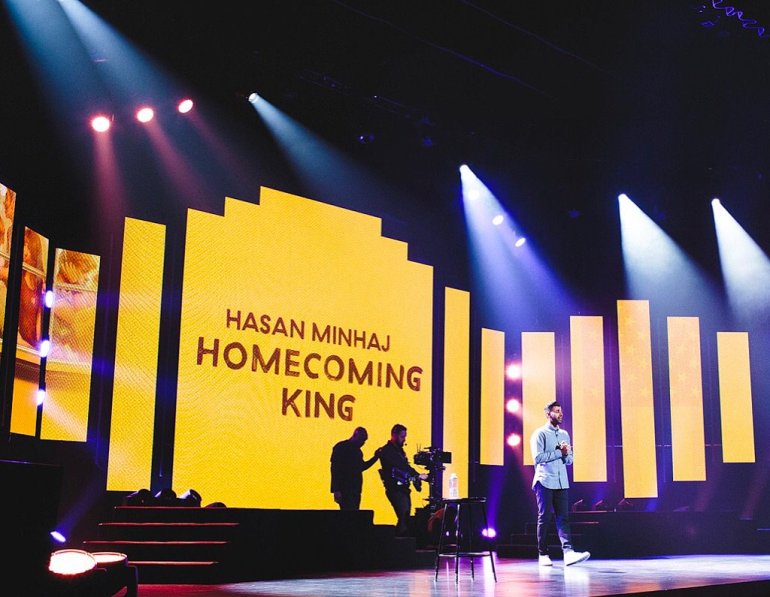 Not only was the content well-thought-out, but the overall performance was as well. The timely lighting and visuals (those Facebook messages and tweets, though) really captured the roller coaster of emotions throughout the show. The camerawork further emphasized the varying moods as it followed Hasan onstage, capturing his animated retelling of hilarious memories as well as close-ups during particularly poignant moments.

I’d be remiss to mention these artistic elements without acknowledging the incredible artwork by Sam Spratt. In a style reminiscent of Norman Rockwell’s famed 20th-century portrayals of white Americana, Sam depicts moments throughout Hasan’s life as a Muslim Indian American, encapsulating the overarching theme of “New Brown America.” The artwork is just another thoughtful element on top of an already meticulously crafted show.

Overall, Homecoming King is unique, well-written and inspiring. It’s hilarious yet honestly heartbreaking. Lighthearted yet moving. Focused on stories of the past yet so pertinent to the present moment and future direction of our country. I strongly encourage everyone to watch it.