Last week, Kevin & I went to Universal Studios for our first time together. Neither of us had gone to the amusement park during the Christmas season before nor had we gone in the years since the addition of the Wizarding World of Harry Potter, so we had a lot to look forward to. We didn’t take too many pictures, as we were trying to pack in as many rides and attractions into the few hours we had at the park, but here are a few photos I managed to take.

[Disclaimer: I apologize for the poor quality of the pictures. I didn’t want to carry my heavy DSLR around the park all day, so I was stuck taking pictures on my iPhone 5. (I’ll be upgrading soon, and I’m excited about it almost exclusively because I’ll be able to take better photos.)] 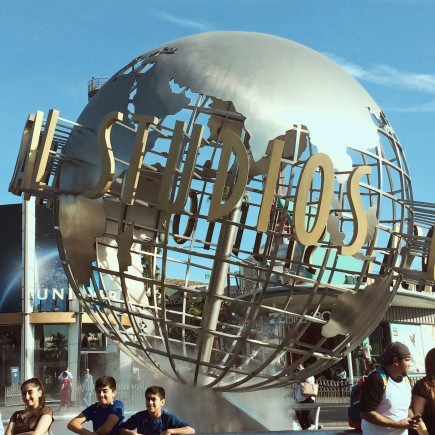 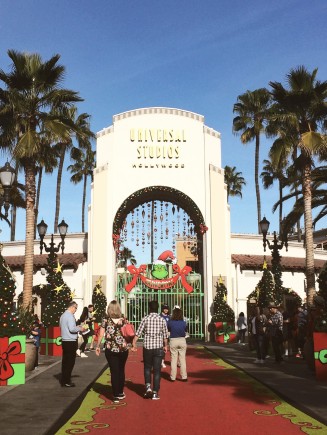 One of the rides Kevin and I were looking forward to most was the beloved Studio Tour. Everyone else was looking forward to it, too, because there was almost a 2-hour wait. Luckily for us, though, we were able to skip the line since we were a group of 2, meaning we could wait at the front and hop on when there was extra space on a tram.

The Studio Tour is a 60-minute ride that takes you around the studio backlots and preserved movie sets, giving you a behind-the-scenes look at some of the most famous films to come from Universal Studios. I hadn’t gone since I was maybe 5 or 6 years old, so there were quite a few changes. First, Jimmy Fallon now hosts the tour. Second, they added a King Kong 360-3D segment, in which your tram in stuck between a T-Rex and King Kong, and Fast & Furious Supercharged, which simulates a high-speed chase from the movie series. Still, they’ve held on to classic parts of the tour such as the flash flood, the earthquake inside the train station, Jaws’ surprise appearance, and Norman Bates chasing after the tram. Despite the long line, the tour is worth the wait. 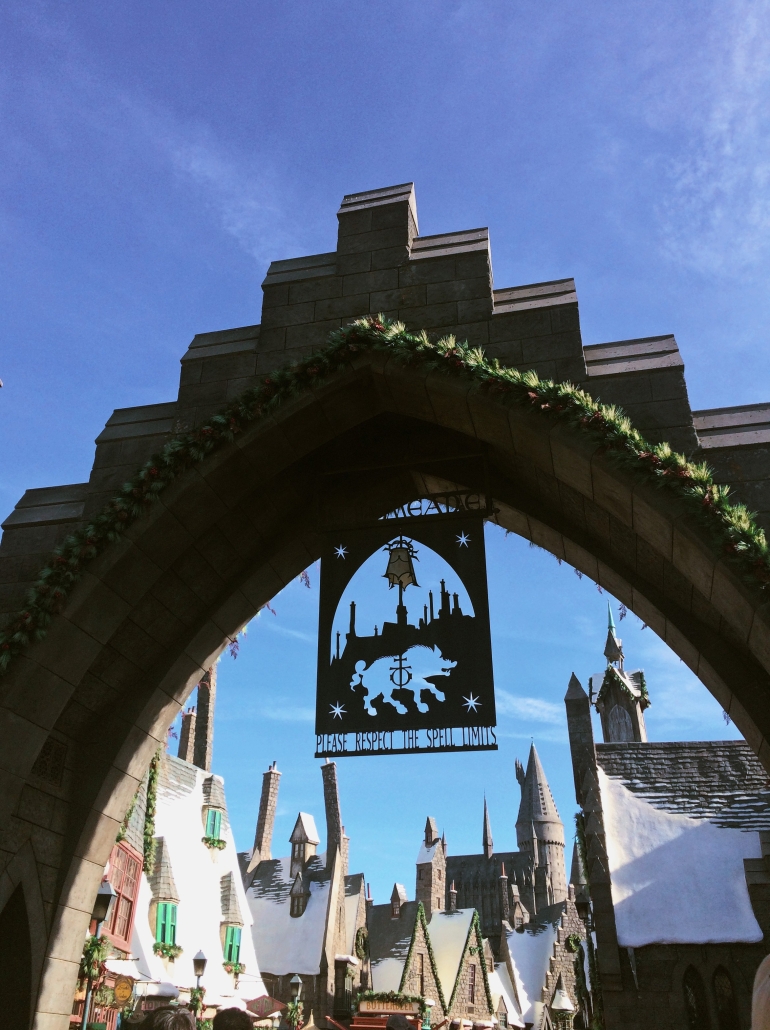 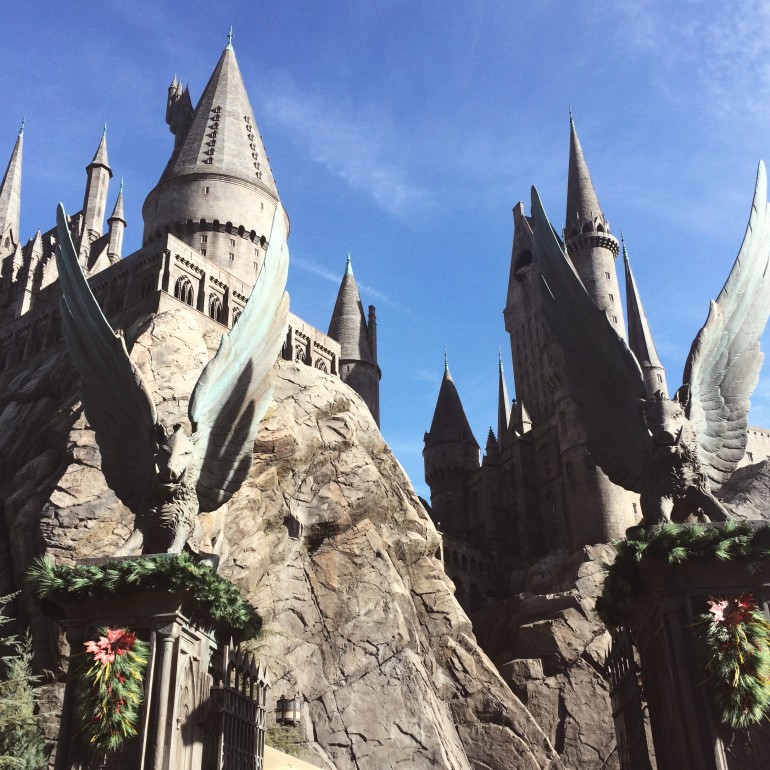 The other thing we were looking forward to most, of course, was the Wizarding World of Harry Potter. I went to the one in Orlando almost 5 years ago, before the expanded it when it was essentially the same as the one in Hollywood now. Still, walking into Hogsmeade is such a mesmerizing experience for any hardcore Harry Potter fan, regardless if it’s your first or fifth time visiting.

There were long lines for Butterbeer and kids in cloaks waiting at Ollivanders for their wands, but we went straight to Hogwarts to get in line for Harry Potter and the Forbidden Journey. The wait was about an hour and a half, but the line was always moving so it didn’t seem too long. Also, there are many things to see once you get inside the castle that keep you preoccupied, such as holograms of Dumbledore, the Golden Trio, and even the Fat Lady.

The ride itself is a simulator that also incorporates animatronics as you follow Harry Potter in his flight around Hogwarts. During the journey, you encounter Hagrid’s dragon, spiders in the Forbidden Forest, and dementors. But aside from these creatures, you also run into familiar characters along the way.

I was hyping up this ride leading up to our trip and especially during our wait, I was worried Kevin would be let down. Fortunately, he loved it as much as I did and we ended up riding it again later that night.

Afterwards, we headed back to Hogsmeade to get some Butterbeer and buy souvenirs. Most of the things I wanted were expensive and overpriced, as expected, so I left with a few small items: a Ravenclaw bookmark, a Hogwarts glass cup, and peppermint toads (which I recommend as an alternative to the full-size chocolate frog).

Next, we watched the Special Effects Show, which gives the audience a behind-the-scenes look at how many of the effects we see in movies are created. It included demonstrations of live animation, a fight scene, and someone being set on fire! It’s about a 25-minute show that incorporates audience participation, so if you have some time in between rides, check it out.

After the show, we grabbed some dinner before heading back to watch The Magic of Christmas at Hogwarts Castle, a light show that takes place every 30 minutes beginning at sunset during the holiday season. The castle is lit up with projections set to favorite Harry Potter songs such as Hedwig’s Theme, Christmas at Hogwarts, and Potter Waltz (from the Yule Ball in the Goblet of Fire). 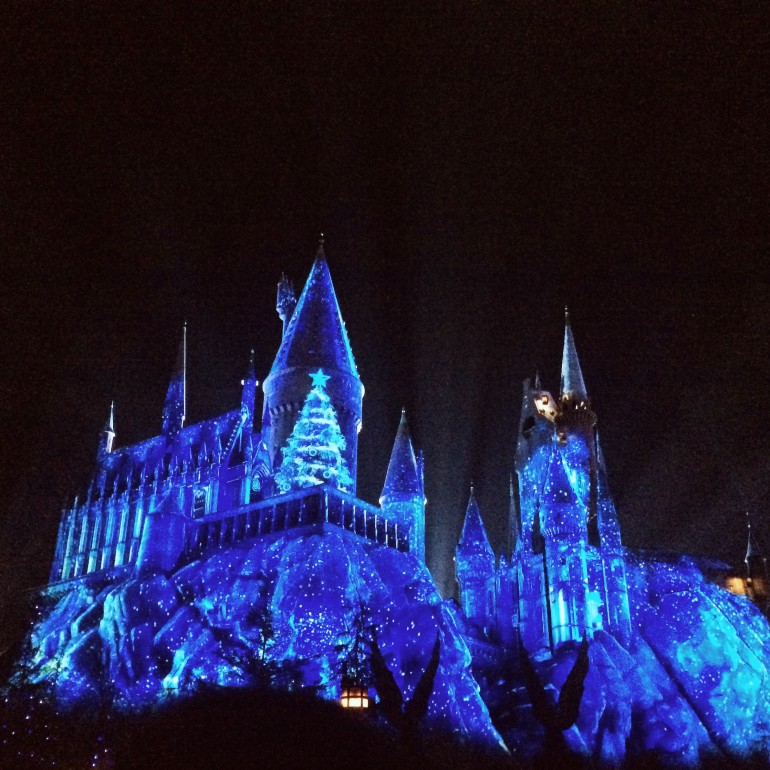 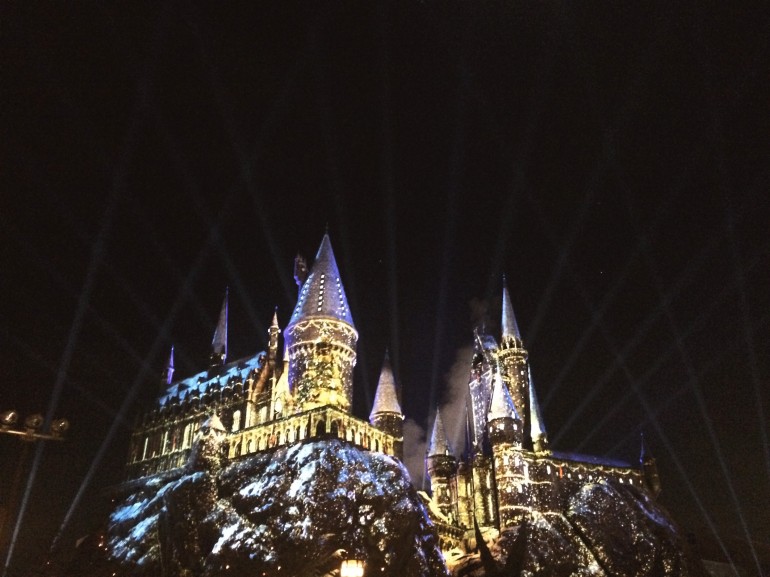 We weren’t able to spend as much time as we wanted at Universal Studios, but we had a magical time nonetheless. I do hope they’ll expand it to the same extent as the Wizarding World of Harry Potter at Universal Studios Orlando, which has rides such as Harry Potter and the Escape from Gringotts and the Hogwarts Express that travels between parks from Hogsmeade to London, but I’m not expecting such an expansion any time soon.

Have you gone to the Universal Studios, either in Hollywood, Orlando, or Japan? If you have, what are your favorite rides or attractions? Share them in the comments below!